DON’T LET THE LAW OF CIVILIZATION STOP YOU
What is the Law of Civilization? I think you’ll find it interesting and relevant. Here it is: 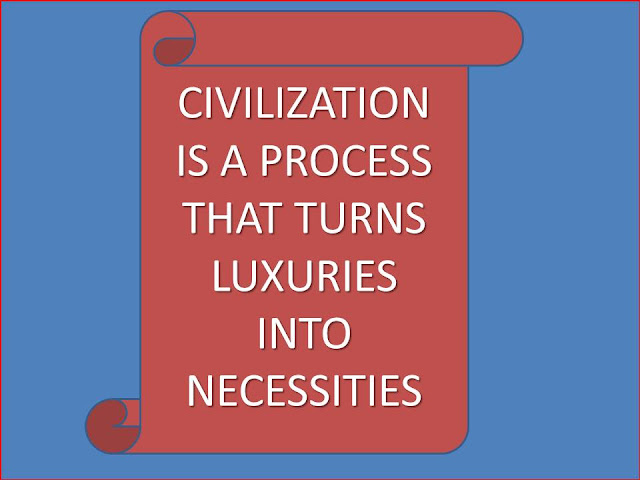 There are many examples of how this law operates. Television is a good one to start with.

The first televisions had small oval screens that displayed shadowy black-and white pictures. They were expensive and broke down a lot. Only one or two people on your block had a set. Everyone flocked to watch and wished they had one. They were luxuries.

Over time, the picture quality, size and affordability improved. Eventually everyone had a TV. Then along came color, and a privileged few owned this luxury until it, too, because a standard household feature. The cycle has repeated itself with HD, flat screens, and 3D. Only it is happening faster, and we all wonder what will be next. What was originally a luxury has become a necessity.

Now, let’s look at the components of this law.

I’m in no hurry to return to the time before flush toilets, electric lights and air conditioning. But every modern convenience has it’s hidden dangers. We get too comfortable, abuse the privilege, and pay the price. For instance, in times past people walked a lot. Now we jump into our car to go a few blocks, and wonder why we are overweight.

Change usually takes place in small increments. I recently found some thirty-year old pictures of myself. I was surprised at how different I looked then. TV didn’t change overnight either but it gradually became an essential piece of furniture. When it breaks, we can’t do without it.

We visited friends and marveled at their HD TV. The next day my wife said: “Our TV picture looks fuzzy.” Well now, isn’t that strange! What happened? It looked fine before we saw that HD TV. Next, my daughter purchased a 3D flat screen and gave us her old 65 inch rear-projection model. A few months later we visited friends to watch a program on their 29 inch TV. I found myself squinting and straining to watch the program.

What is a luxury?
In terms of the law of civilization, a luxury is something you wish you had, but can’t afford, so you do without it.

What is a necessity?

A necessity is something that used to be a luxury, before you finally acquired it. Now think you cannot do without.

What are the consequences?

Several years ago we took a team down to Mexico to place gospel recordings in the hands of migrant workers. Four men from a local town had promised to meet us at the camp. They showed up late and told us this story. Their car broke down, so they decided not to go. Then one of the men said, “Remember, we used to walk to the camp before we had a car.” They remembered – and started walking. Their car was a luxury-turned-necessity. It had almost prevented them from participating.

The Bible warns us, “Don’t let the world around you squeeze you into its own mold, but let God re-mold your minds from within…” Romans 12:2 (J. B. Philips).

The apostle Paul told the Philippians, “I have learned to be content in whatever circumstances I am. I know how to get along with humble means, and I also know how to live in prosperity; in any and every circumstance I have learned the secret of being filled and going hungry, both of having abundance and suffering need. I can do all things through Him who strengthens me” (Philippians 4:11-13). Notice that he had to learn to be content. That does not come naturally to most of us. 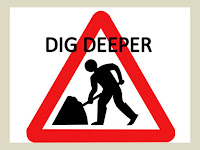 Experiment with doing without one or two of your luxuries-turned-necessities for a day. Try your television set, or the air conditioning in your home or car.


Notice: We want to expand these Dig Deeper sections. If you have suggestions, we'd love to hear them.Please let us know by entering your comments below. Thank you.